His Excellency John Mahama, Former President of the Republic of Ghana

H.E. John Dramani Mahama was the 4th President of the Fourth Republic of Ghana, elected for a four-year term. President Mahama took over from late President John Evans Atta Mills and assumed the role of Head of State, Head of Government, and the Commander-in Chief of the Armed Forces.
President Mahama was born in Damongo and completed his undergraduate education at the University of Ghana with a degree in history and communication. He later went to Moscow, Russia for a Post Graduate Diploma in Social Psychology. A historian, writer, and communication expert, Mahama was a member of the Parliament from 1997-2009, first winning on the ticket of the National Democratic Congress (NDC) prior to serving as vice-president and president of Ghana. During the NDC Administration of 1996-2000, Mahama was a member of the economic management team and played a key role in the reintroduction of the Value Added Tax (VAT). In 2002, Mahama served as the first chairman of the National Communications Authority, and helped reshaping Ghana’s telecommunications sector after deregulation. As Member of Parliament, he was also a member of Transport, Industry, Energy, Communications, Science and Technology Committee of Parliament. In 2016, H.E. became the co-chair of the Sustainable Development Goals Advocate Group and worked on promoting a universal sustainable development agenda.
At the end of his term in office, HE John Dramani Mahama joined the Economic Community of West African States mediation team to resolve the post-election political impasse.
Copies of H.E. Mahama’s book My First Coup d’Etat: And Other True Stories from the Lost Decades of Africa will be for sale.
NO LARGE BAGS WILL BE PERMITTED.

Presented by the International House Global Voices Lecture Series and the University of Chicago Institute of Politics. 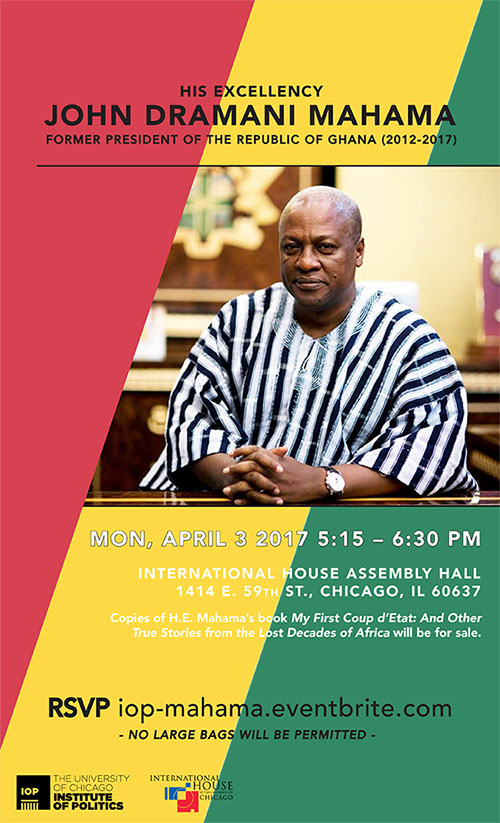