The status of Western China's Muslim minorities has long been a sensitive point in Chinese domestic policy. But in the past two years, state pressure on these communities has drastically increased. Most notoriously, large numbers of Uyghurs and Kazakhs have been forcibly taken to interntment camps that the Chinese government terms "re-education" camps, and that activists describe as concentration camps. The arrests have had a profoundly chilling effect on traditionally Muslim communities in the region. Major cultural figures and ordinary citizens have vanished with no trace, while those who remain have been cowed into silence. The government frames this detention as a necessary measure for combating dangerous extremism, while activists say detainees have been targeted for activities as innocuous as travel abroad or religious observance. This panel brings together activists, policy experts, and leading scholars on the human rights crisis in Xinjiang.

Moderator: Kenneth Pomeranz (University Professor of Modern Chinese History and in the College, University of Chicago).

The program is free and open to the public. 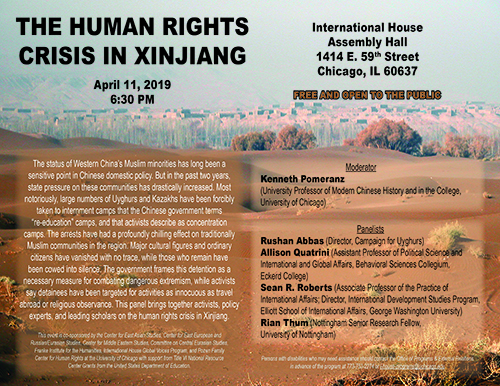