On May 30, 2017, Natalie Kessler and Rena Slavin published an article in the Hyde Park Herald promoting the upcoming Dukati and Biseri Annual Concert. Read the article here.

The Illusionists Film Screening and Discussion with filmmaker Elena Rossini 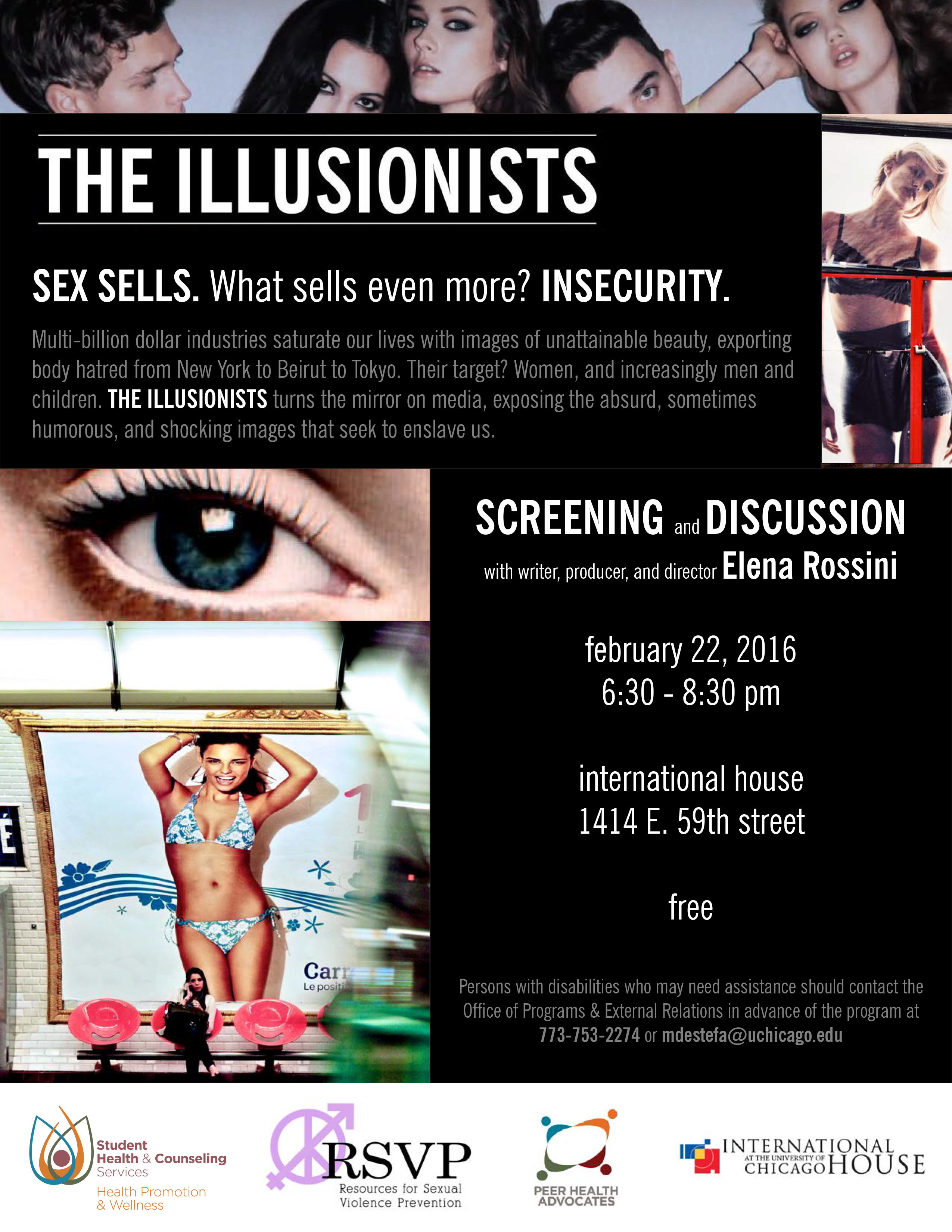 Elena Rossini is an Italian filmmaker and social entrepreneur who visited International House on February 22  for a screening and discussion of her film, The Illusionists. This award-winning film, a documentary about body image in the media, is unique in its breadth; It discusses ideals for both male and female bodies in several different regions of the globe. Read more here.

On Post-Election China-US Relations: An Interview with Mr. Hong Lei 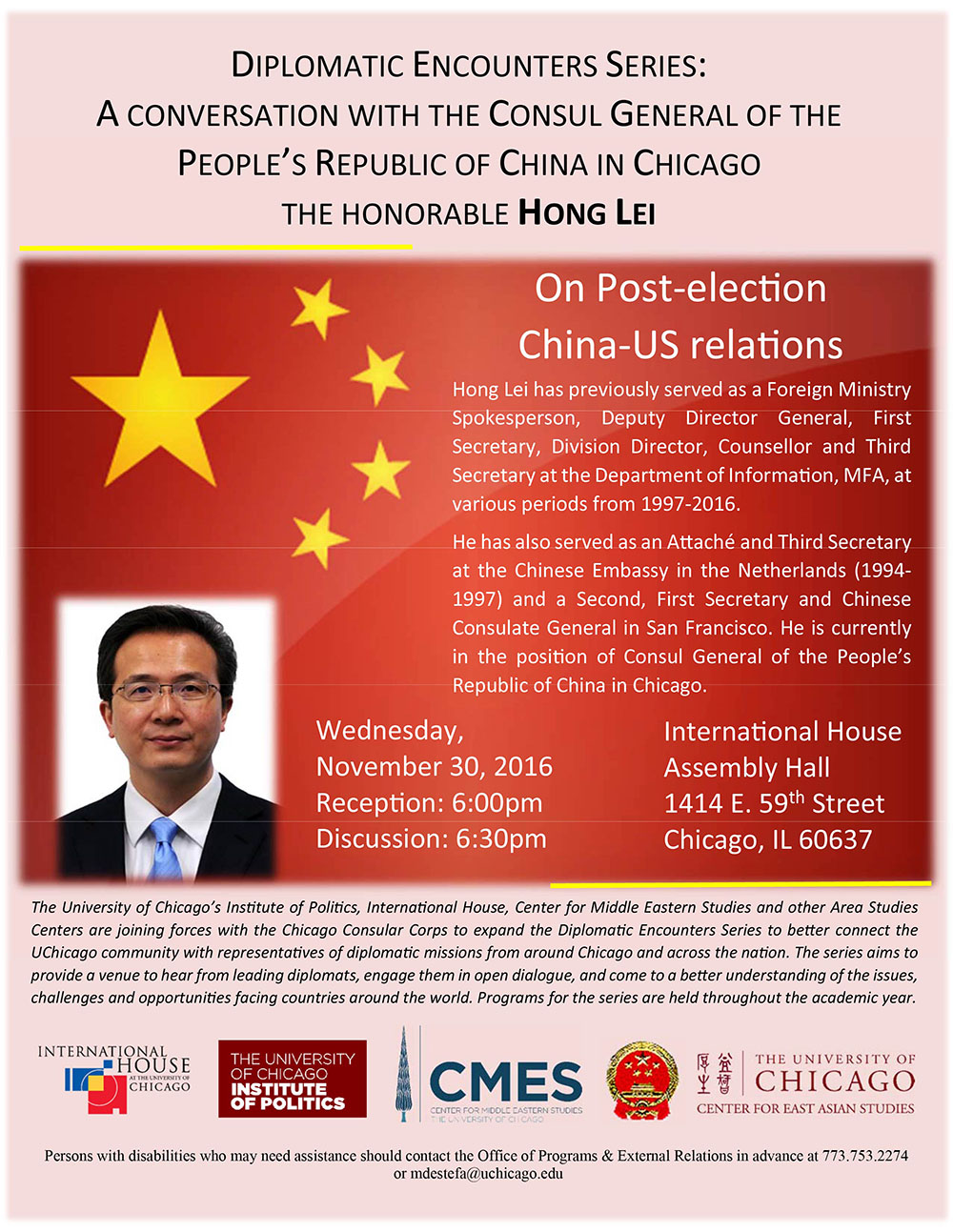 After a prominent career in the Chinese media, Mr. Hong Lei arrived in Chicago in late July to fulfill a new role as Consul General of the People’s Republic of China in Chicago. Since then, he has traveled throughout the Midwest with the aim of strengthening China-US relations and promoting people-to-people exchanges between China and the region. On Wednesday, November 30, Global Voices Editor Hanna Pfeiffer spoke with Consul General Hong Lei about his predictions for the future of China-US relations and his response to widespread concerns regarding China's policies and attitude toward the United States. Read more

"We Are Neighbors. We Need to Work Together:" An Interview with Miguel Fraga On Friday, November 17, 2016, Miguel Fraga, who has served as first secretary of the Cuban Embassy in Washington, DC since it reopened in July 2015, visited the University of Chicago’s International House to give a presentation on the state of Cuban-American relations. During his talk, Fraga emphasized the importance of establishing goodwill and respect between the two neighboring nations for their mutual benefit. After the presentation, Global Voices Metcalf Fellows Patrick Reilly and Hanna Pfeiffer sat down with Fraga to discuss US-Cuban relations and Fraga’s experiences as a Cuban diplomat. Read more

Chicago Ensemble to kick off 40th season at I-House

"Canada Would be Wise to Include the Inuit:" An Interview with Aaju Peter Inuit rights activist Aaju Peter was born in Inuit Greenland, but she grew up in Denmark, away from her culture and language. She then moved to Canada and immersed herself in Inuit culture, volunteered for women’s and interpretation organizations, and graduated from Akitsiraq Law School. Currently, she runs a home-based sealskin garment business and travels to advocate for Inuit rights. On Thursday, October 27, Peter visited International House for a screening and discussion of Arctic Defenders, a documentary in which she is featured. During the film, Global Voices Metcalf Fellow Hanna Pfeiffer spoke with Peter about her experiences and her activism. Read more

"Solutions that Make Sense for Chicago:" An Interview with Chris Wheat Before the event, Global Voices Metcalf Fellow Caitlin Moroney spoke with one of the Forum’s guests, UChicago alumnus Chris Wheat, about his work as chief sustainability officer and senior policy advisor for the office of Chicago mayor Rahm Emanuel. Read more

"Argentina Has Work to Do On Its Own:" An Interview With Ambassador Martín Lousteau On October 18, Argentina’s ambassador to the United States, Martín Lousteau, visited the University of Chicago’s International House to discuss the political and economic challenges facing Argentina. An economist by training, Lousteau has a unique perspective on his country’s politics, having held a number of positions in Argentina’s private sector and government, including as Minister of Economy and Production of Argentina, as a Member of the Argentine Parliament representing the city of Buenos Aires, and, most recently, as a candidate in Buenos Aires’s 2015 mayoral election, in which he received 48.4 percent of the total votes. Before the event, Lousteau spoke with former Gate co-editor-in-chief Patrick Reilly about Argentina’s politics and its relationship with the United States. Read more

"Failure Is Not An Option Here:" An Interview With Professor Marc Edwards On October 14, 2016, Marc Edwards, Charles P. Lunsford Professor of Environmental and Water Resources Engineering at Virginia Tech University, visited the University of Chicago’s International House. Edwards exposed that the mismanagement of public water systems caused a 2004 lead poisoning outbreak in Washington, DC, as well as the more recent crisis in Flint, Michigan. He discussed his role in these events in his October 14 lecture, entitled, “Perspectives on Environmental Injustice in the Flint, Michigan Water Crisis.” Before the lecture, Global Voices Metcalf Fellow Caitlin Moroney spoke with Edwards about his work in exposing environmental injustice. Read more

Justice in the Service of Equality: An Interview with Christiane Taubira On October 10, Christiane Taubira, France’s former Minister of Justice, visited International House for a lecture entitled “Justice in the Service of Equality.” Taubira has over two decades of experience in French politics. From 1993 to 2007, she represented the French Overseas Department of French Guiana in France’s National Assembly, where she successfully fought for a 2001 law recognizing the slave trade as a crime against humanity. In May 2012, French President François Hollande named her Minister of Justice. In this role, Taubira was responsible for coordinating France’s response to the January 7, 2015 Charlie Hebdo attack, and the November 13, 2015 Paris terror attacks. After Taubira's lecture, Global Voices Interviews Editor Patrick Reilly spoke with her about her advocacy for justice and equality. Read more.