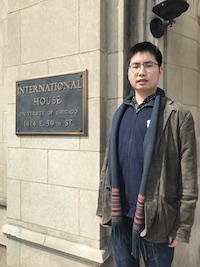 Hekang Yang is an international student from China studying in the Master of Arts Program in the Social Sciences at the University of Chicago. He will use the grant for his project Curing the African Diaspora Community in Guangzhou, China: Disease Stigma and Health Care. Hekang Yang will spend six weeks in China conducting a health survey and working to bridge the gap between local health resources and the African community with the goal of creating a permanent health support system. The project seeks to reduce the disease stigma on African migrants and builds a long-term relationship between the African diaspora community and local medical resources. The project will be completed in Guangzhou, China which has the largest African community in Asia. The project will partner with Sun Yat-Sen University and the Guangdong Second Provincial General Hospital which are both leading institutions in China.

My name is Hekang Yang, and I am an international student from China studying in the Master of Arts Program in the Social Sciences at the University of Chicago. I am happy to have received the Davis Grant and take the opportunity to carry out my summer project, “Curing African Diaspora Community in Guangzhou: Disease Stigma and Health Care” in Guangzhou, China!

During my a pilot trip in Guangzhou last summer, I realized that Guangzhou, the third biggest city in China, has the most extensive African community in Asia. The number of Africans living in China is still unknown. Recent estimates range between 20,000 and 200,000. African migrants confront various barriers to housing, employment, health and medical resources. Residents also have disease stigma and racial bias to international migrants. The newly established African Community Center does not have a health division yet. Thanks to the generosity and support from the UChicago International House and Davis Peace Foundation, I am able to utilize this grant to investigate African migrants’ health conditions, organize public health workshops, and set up a health care division in the African Community Center with the help from Sun Yet-Sen University and Guangzhou Second Provincial General Hospital. Currently, I have already translated my proposal into Chinese and sent it to the local community center. I expect to establish regular contacts with them before my arrival. I am also going to research and write a brochure and, with the help of I-House’s interns, translate it into four languages.

By offering medical help I believe that it is a critical component to build sustainable and peaceful African diaspora community in China. Furthermore, it serves as a model for other places with similar issues. I am excited and a little nervous about my five weeks in Guangzhou this summer!  I know it won’t be easy, but I am so grateful to have this opportunity.

Here are some pictures of the international migrant community where I will be working at in Guangzhou. 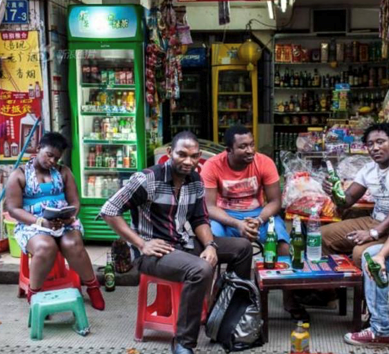 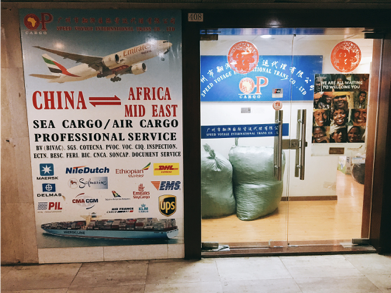 In the last two months, I had bi-weekly meetings with the I-House, coordinated my partnership with the Dengfeng Community Center, and drafted my medical pamphlet.

Under the support of the I-House, lots of things, including my flight to Guangzhou and rental apartment are successfully reserved, and my pamphlet is being translated. In the meantime, I overcame some understanding with the local cadres in the Dengfeng community who were initially reluctant to accept my proposal because of the political sensitivity in my project. It was said that some Chinese students investigated the African community, under the help of community cadres, last summer and their final report was utilized by the U.S. government to comment on the human rights issues in China. After several times of discussion, I re-assured the community center that my project will not do any research investigation. Instead, my agenda was helping the center to develop a health division, which they do not have yet. Thus, I spent many hours researching and compiling my medical pamphlet. During my conversation with a doctor in Guangzhou No.2 Hospital, she said the biggest problem with foreign patients is the language barrier. My brochure adds many conversations which the African community can use in hospitals. I really appreciate that the I-House coordinated some interns to help me translate my pamphlet draft into French and Arabic!

Before my departure to Guangzhou, I will have two additional meetings with I-House for some final preparation. I really look forward to starting my project on July 14!

It was a very interesting and busy week. At the midnight of July 15th, I arrived at Baiyun Airport, Guangzhou and went to my rental apartment right away. In the next two days, I settled down in the new place, met with my project partner, and visited the people in correspondence at collaborated institutions including Dengfeng Community Health Center and Sun Yat-sen University.

After several rounds of meetings, proposal drafts, and negotiations with doctors in the health center, I have accomplished two things: set up a long-term African Children Vaccine Program and finalized the content and circulation of my medical pamphlets (Chinese-English, and Chinese-French). There are more than one hundred African children in this neighborhood. We realize the vaccine program can help improve the household stability and community integration. The health center provides additional materials to the medical pamphlets and will help us distribute them among African residents. In the next step, we will finalize the vaccine program’s payment structure, advertisement, and check & balance.

Two things are underway in the next week. I will meet my contact person in Dengfeng Community Foreigners Service Center (who was away for a business trip) to discuss the planning of health division in the center. Second, I am conducting a field survey on African community to figure out their health concerns. 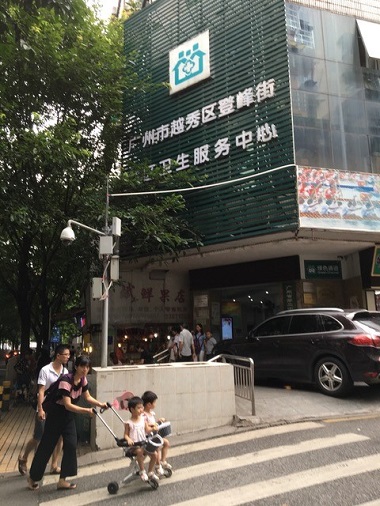 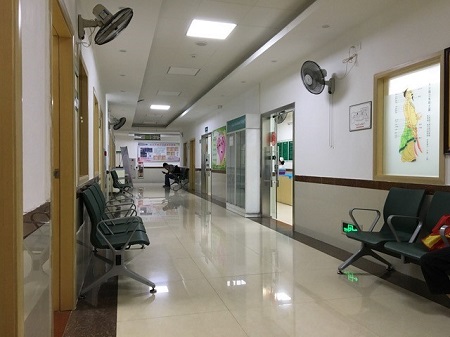 This is a productive week. We start our collaboration with Dengfeng Community Foreigner Service Center. The foreigner service center will distribute medical pamphlets, advertise the vaccine program, provide space for workshops, and most importantly develop the health division in the future. Though the Chinese police office has not released any official statistics, there are more than eight thousand visits to the foreigner service center last year. Most of the African residents in this area come from Mali, Congo (Democratic Republic),  Congo (Republic), and Guinea.

In our meetings with social workers, we realize many obstacles to interact with the African community and implement health awareness project on these residents. First, it usually takes several years for social workers to establish a trust relationship with them. Second, the local Africans are highly sensitive to hygiene-related welfare projects. Take the subsidized physical examination project, they think the Chinese government will collect their biological data.

As solutions, we are brainstorming three strategies. First, we are going to organize a practical-oriented medical workshop so that more people are willing to come. Second, we are going to establish the medical help division. In doing so, we conduct surveys with the foreigner service center and figure out the medical instruments and common drugs in need. Third, we are going to strengthen the African-Chinese children football team. Through community sports games, we believe the interracial bonds among children and their public effects can promote the healthcare awareness within the community. 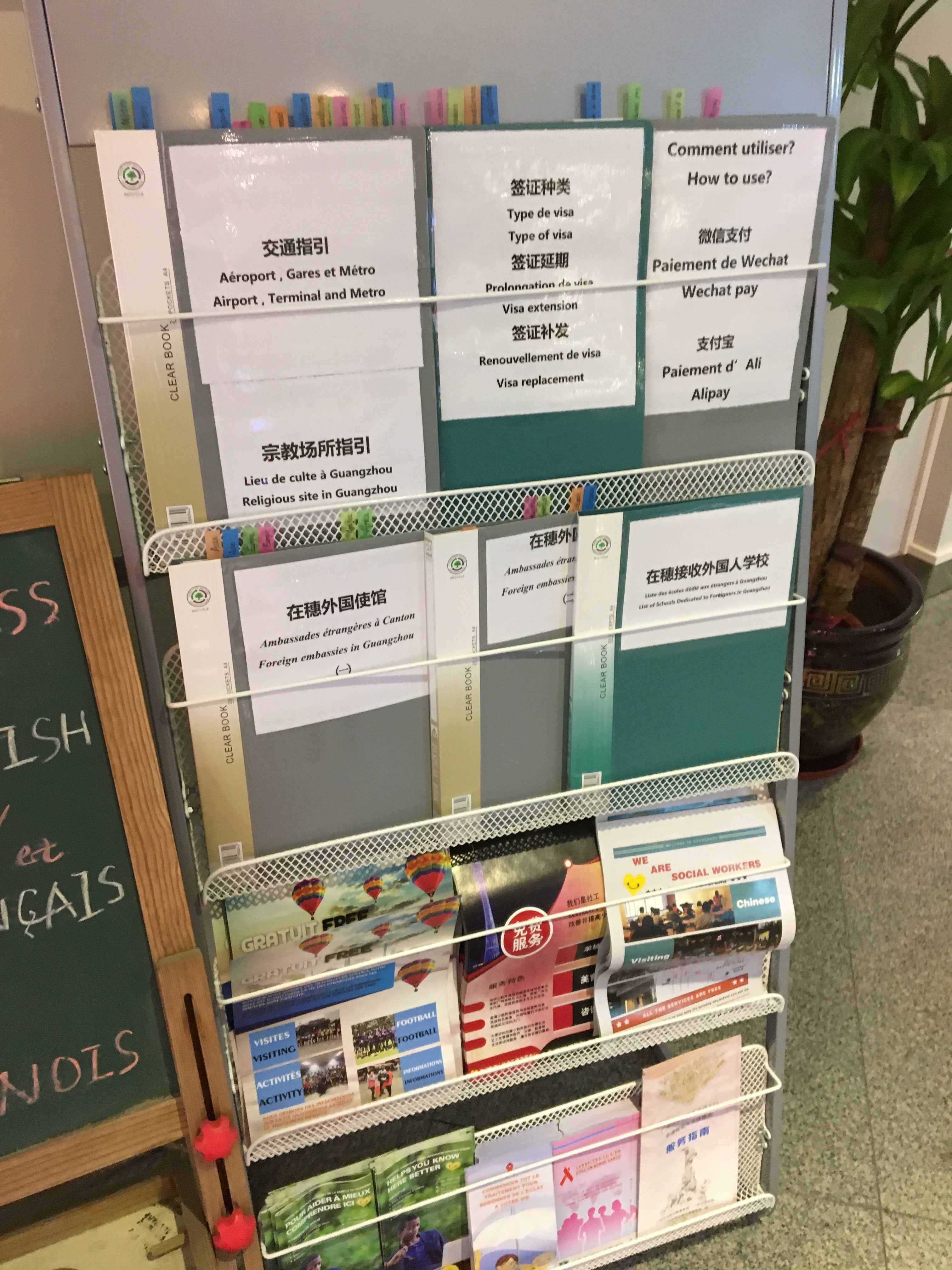 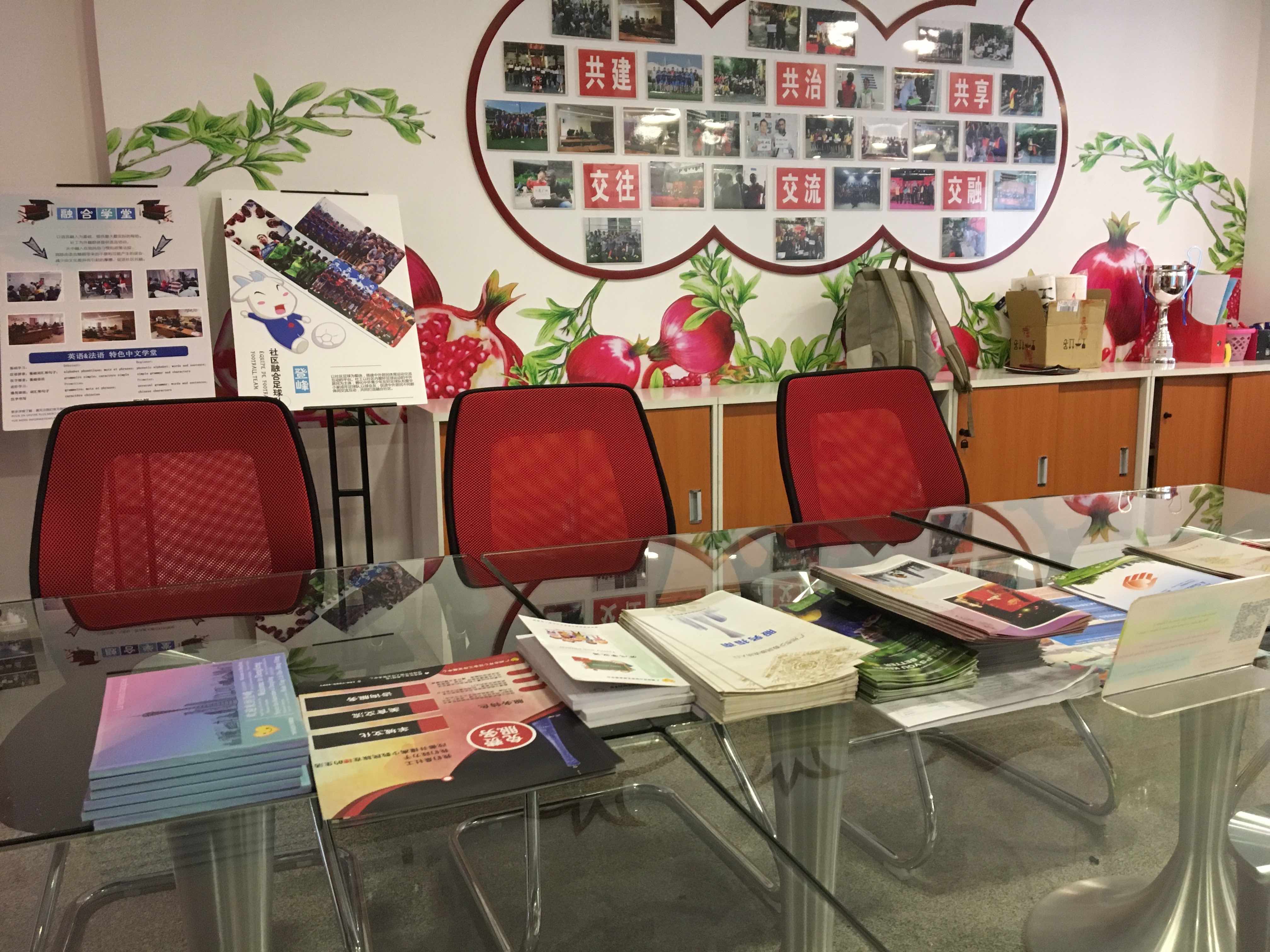 In this week, we continue our collaboration with social workers in the community center. First, we are shopping for medical equipment to establish the health division in the Dengfeng Community Foreigner Service Center. Because of diet habits, local African residents are suffering from high blood pressure and blood cholesterol, which in turn increase their health risk such as heart attack. Therefore, we decide to purchase a dozen of blood pressure and blood sugar machines in respect to diagnose and control their potential health risk. These machines will be allocated in the health division at the foreigner service center, chambers of commerce, and churches. Besides that, in one hundred medical boxes, we also include first aids, contraceptives, thermometers, masks, etc. We are negotiating with the local hospital to make sure if we can distribute medicines ourselves or other alternatives.

Raising the awareness of health within the diaspora community is our next task, particularly among African women who usually are in the vulnerable position due to socioeconomic and educational reasons. According to African residents’ feedback, our medical pamphlet is helpful. Yet, it is too professional for the less educated. We are researching new materials and trying to design a visual-oriented pamphlet for African women.

Our next week’s task will be the logistics of our workshop and coordination with African social organizations including family churches and chambers of commerce. 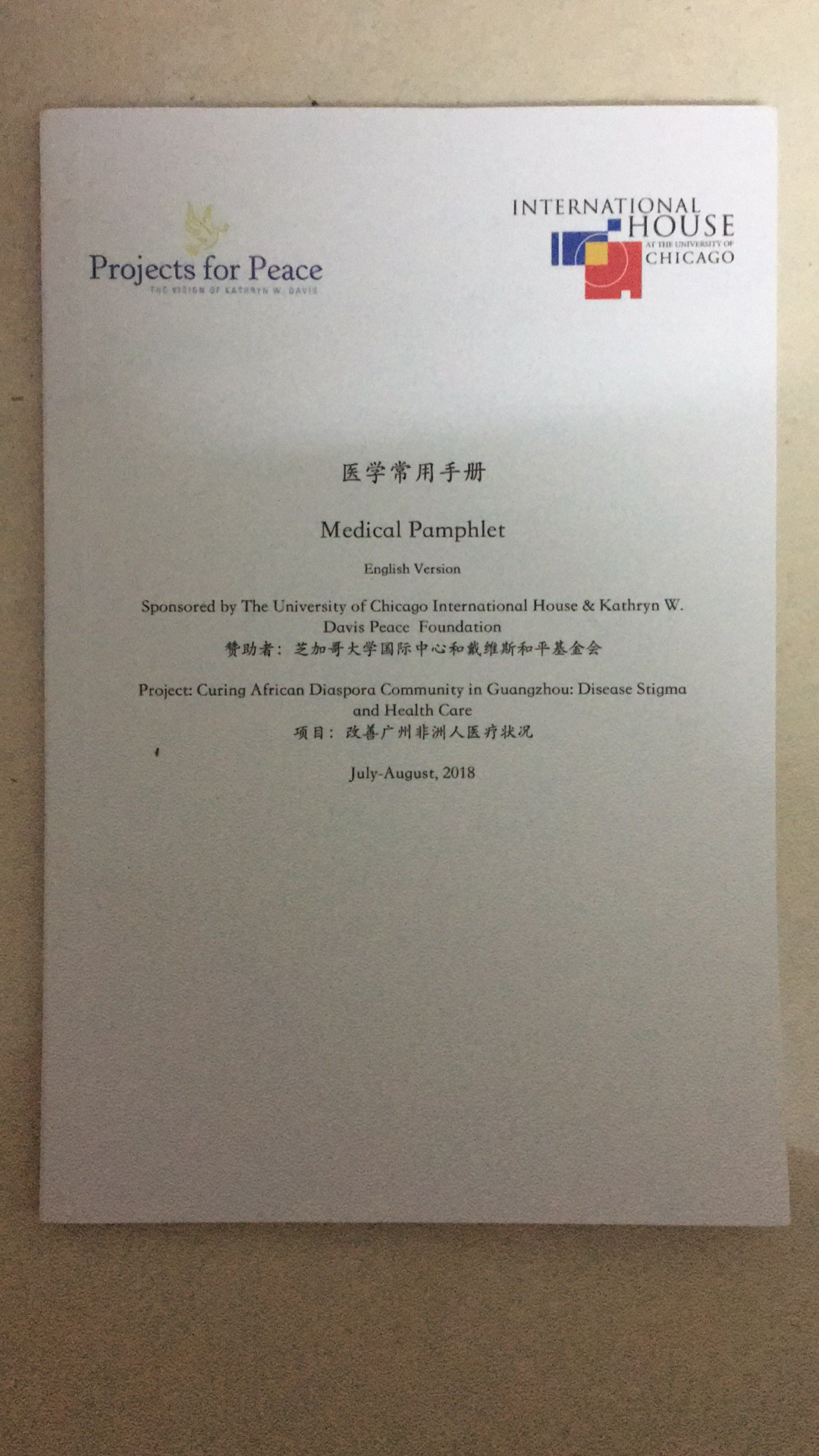 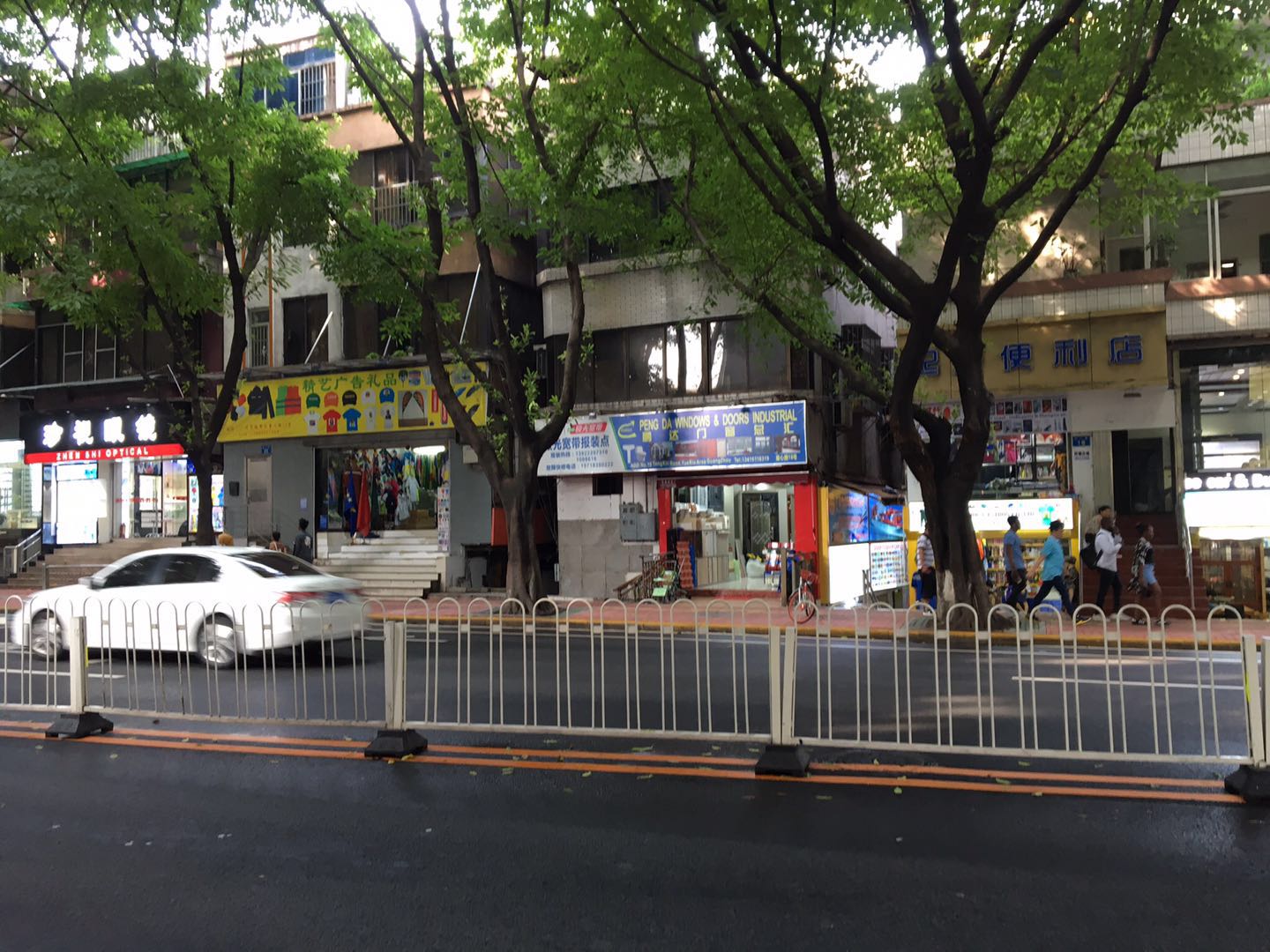 This week was a challenge. When we were finalizing the children vaccination program with Dengfeng Community Health Center, a national vaccine crisis occurred—-several pharmaceutical companies produced bad children vaccines. The scandal stimulated public anger in social media and the government for intervention . The  Community Health Center was reluctant to carry out our children vaccination program which may increase their risk of medical incidents with foreigners. It was a very difficult moment for our project. We thought we had to either find a new partnership or give up the vaccine program. In the end, we reached a compromise. We would distribute a third portion of our vaccine fund to set up a family doctor program for African women. At the meantime, two third of the vaccine fund  will continue to be used for African children vaccination.

We also implemented a onsite community service in Dengfeng Trading Mall where many African businessmen/women visited and stayed. With our medical equipments and resources, the Dengfeng Community Foreigner Service Center is able to set up a monthly free community medial service. Through this project, we coordinate the partnership between Health Center and Foreigner Service Center for information sharing to enhance the allocation of social medical resources for foreigners.

Overall it has been an eye opening experience. The community building for Africans in Guangzhou is at its initial stage.  However I am really glad the efforts we made was taken positively by social workers and local Africans including parents and women. They were really happy receiving our health care programs, willing to attend the community medial service, and recognize the importance of physical health. I really appreciate many supports I got from Davis Peace Foundation, UChicago I-House, Dengfeng Community Health Center, and Foreigner Service Center during my project. This project would not be accomplished without their generous help! 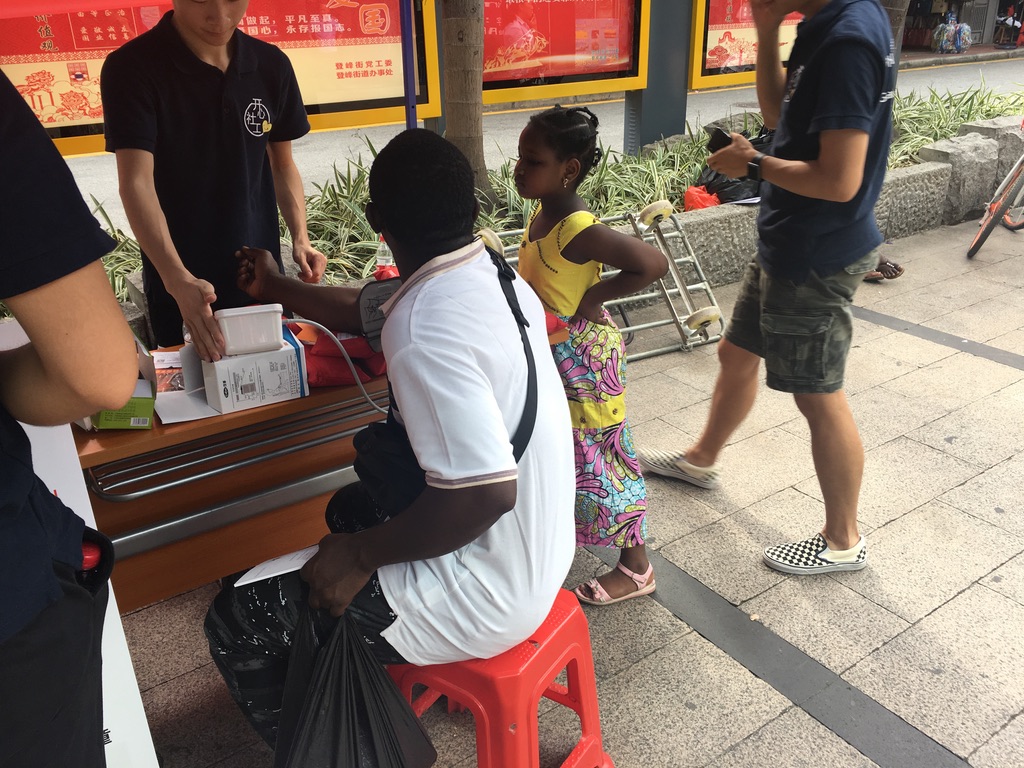 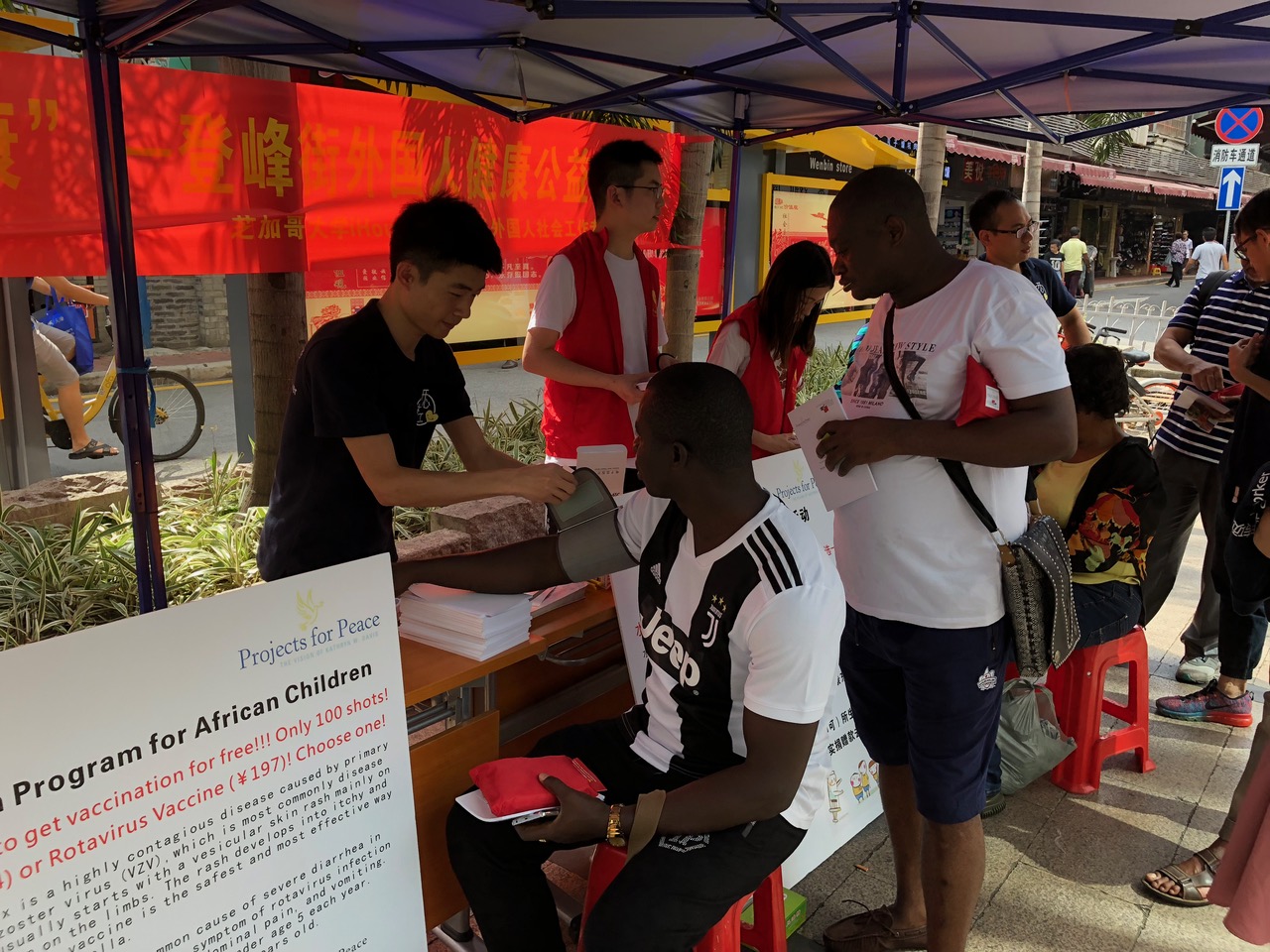